The real breakthrough of the internet of things is the quantity and quality of actionable information that is used for creating value. This explains the crucial role of sensors in IoT: they are the gatherers and the gatekeepers of this actionable input data. Getting sensors to be truly smart, however, is not a trivial undertaking.

Smart sensors have been formally defined as follows: “A smart sensor is a device that takes input from the physical environment and uses built-in compute resources to perform predefined functions upon detection of specific input and then process data before passing it on.” While this definition is technically correct, it is rather limited; it describes only the minimal requirements for what a smart sensor can be.

In order to be effective and competitive in the real world, smart sensors should go beyond the minimum requirements by including the following features and capabilities:

Rich and high-resolution data — This is a preliminary requirement, as all further processing is based on raw input data.

Highly secured — IoT endpoints, such as connected sensors, are very susceptible to cyberattacks. A multilayer security approach using encryption keys and secured protocols must be implemented by design.

Privacy protected — The multitude of data enabled by sophisticated sensors may include sensitive personal information. In places where privacy is expected (e.g., home, healthcare, workplace), effective privacy protection measures should be implemented.

Scalable — Sensors should be configured such that their numbers can be easily scaled. Plugging more sensors into a network should be simple and straightforward.

Upgradeable — In view of the expected lifecycle of sensors and the rapid technological changes, smart sensors must be “future-proof,” allowing for remote firmware updates.

Interoperable — Given the lack of standardization and the increasing variety of ecosystems and platforms, smart sensors should be designed from the ground up to support leading communication protocols to fit within the diversified ecosystems.

Easily commissioned — Setting up smart sensors for an IoT system can be a rather lengthy and expensive process. It is therefore vital that the sensors be designed for easy installation and commissioning using automated or semi-automated processes.

Affordable — In order for smart sensors to proliferate, it is highly critical that they be inexpensive. While this precondition often conflicts with the long list of required features and capabilities, there is no room for compromise here, as pricing is a crucial gating factor.

What makes buildings intelligent is determined to a large extent by the capabilities of their sensors. Gathering actionable data about the building systems and environment can dramatically reduce costs and generate business intelligence. Since one of the key technical attributes for smart buildings is a permanent infrastructure for collecting granular occupancy data, smart sensors are becoming critical enablers in this domain.

In this regard, image-based sensors are emerging as a good example of smart sensors in commercial buildings. The richness of visual information together with onboard processing allows them to spearhead the smart sensor revolution. IP cameras, which are used primarily for surveillance purposes, can serve as a basis for such smart sensors. Driven by increasing processing power at decreasing costs, there is an ongoing market swing away from server-based analytics towards edge-based analytics in IP cameras. Leading vendors, such as Bosch, have already announced that all of their IP cameras will feature edge analytics capability. Other vendors are providing edge analytics data without streaming the video, thus protecting occupants’ privacy and further reducing network traffic. If produced in miniature sizes, such image-based sensors can be incorporated into widely spread appliances such as networked lighting fixtures, thereby covering the entire building space.

When providing the complete package of features and functionalities, the value of these smart sensors for commercial buildings is immense, addressing different use cases across all aspects of the building. A small sample of such use cases is outlined below:

In summary, smart sensors play an undeniably key role in driving the IoT revolution. Understanding the full set of features and capabilities associated with these sensors is essential for practical implementation.

All IoT Agenda network contributors are responsible for the content and accuracy of their posts. Opinions are of the writers and do not necessarily convey the thoughts of IoT Agenda.

How was the idea of PointGrab born? How would you describe its ultimate mission?

PointGrab started off with totally different technology. In 2015, the Company decided to make a pivotal change from gesture control technology to smart sensing, making some use of the original algorithm yet developing a brand new product that was aimed to assist tenants – companies and people – in making better use of their real estate, through capturing the count of the location of people in any given space at any given time while strictly protecting people’s privacy. Our ultimate mission is to allow organizations to manage the human flow in their buildings while protecting the privacy of the people.

Workplace occupancy sensors are the easiest and most cost-effective solution for safe back to office strategy.

Organizations and Professionals around the world are getting restless after months of working remotely. Managers want to interact with their teams in a traditional office setting, but also do not want to put the employees at risk. Offices will reopen, even if it is too early to determine if this is going to be for all employees on all days of the week. 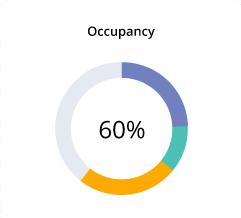 We used to expend the office to accommodate more personal. But Covid came along and recreated the way office is used both from the aspect of office owners and from the employees perspectives.

The new way of office use is much more flexible, employees come and go and expect to have a much more loose office time mixed with time at home, this situation is both an opportunity and an headache.